I had committed somewhat late to running the Chicago Marathon because I was having an issue with my knee and was pretty sure that another round of marathon training wasn’t going to help matters. However, I really wanted to run Chicago and because I had run under 3:00 hours before, I could qualify for their American Development Program which offered a lot of cool perks (one of them being the ability to get into the race since it was technically closed). I decided to go for it and signed up in late August.

I was also doing Hood to Coast and a 10K race in August so I played around with my training a little to focus on those and really dialed into marathon training in September. I was able to follow my training plan pretty closely, though my knee was giving me some problems. As I got closer to my marathon (and my mileage ramped up), I had more of the sharp pains and even had to stop mid-runs a few times. I had been to the doctor and knew that I probably wasn’t going to make things worse by running on it, but I also wasn’t interested in getting another shot in my knee which was what he recommended. The weeks flew by and then I was in my taper week. Things held steady until after one of my easy runs, I noticed a pain in my hamstring. I hoped it was just something that needed to be stretched out so I tried that and a little bit of icing, but it didn’t go away. On every run that week (and even when walking around) I felt it and I continued to baby it, hoping I could make it go away in time for the marathon. But the day came to leave and I was still feeling it.

My husband and I left for Chicago on Thursday afternoon and got in pretty late that night. I got up the next morning and tried to run a few miles on the hotel treadmill and felt my hamstring the entire way. I knew then for sure that it wouldn’t be going away in the next 2 days, so I adjusted my mindset. Luckily we were going to the expo that morning and I was sure somebody would be selling something that could cure what ailed me ;-).

We got to the expo around mid-day and it was already hopping. We snapped a few pictures on the way in… 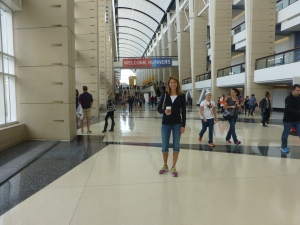 I got my bib number and race shirt and then made my way up and down the aisles as fast as possible. As much as I like shopping at expos, my husband dislikes it :). I found a cute Nike 3/4 zip top that says, “Run like ‘L,” (which I needed to have explained to me :)) some tape for my hamstring and the spray adhesive to go with it, some Mizuno breath thermo gloves, and some cool Nuun Chicago water bottles.

We went to dinner that night and turned in early…exhausted from the expo and travel. Saturday we woke pretty late (though it was still early enough Pacific Time). We grabbed a late lunch and decided to do the Hop on/Hop off bus tour through Chicago. It was a great way to spend the day before a marathon, while still getting out and enjoying the city. We hopped off just in time to catch the Huskies take on Oregon in a sports bar. Brook enjoyed the bar food and plenty of beers while I chugged my water and cursed him under my breath ;-0.

I am a runner, wife and mother of three. I've been running since I was a kid and had my first taste of victory when I beat all the boys (and girls) in my grade at a school run. Since then, I've had a love/hate relationship with running....I love to run but hate how the training can sometimes monopolize my time and prevent me from doing "fun" things. So, I try hard to find the balance between challenging myself with running, while still having lots of fun on the side.
View all posts by Paige →
This entry was posted in Uncategorized and tagged Chicago, Chicago Marathon, Marathon, Nike, Oregon, Running, Seattle, Sports, United States. Bookmark the permalink.