In my spare time….

I obviously have not been able to run much recently so I decided the only way I was going to stay sane was if I put my time and energy into something else. I have had stomach issues for years now and have tried different diets to see if I could figure out what was causing my issues, but I had no luck. I had been tested for food allergies (none!), tested for Celiac Disease (nope), tested for lactose intolerance (just fine) and I had tried eliminating both gluten and dairy (separately) but never found the relief I was looking for.

There were two other things that I wanted to try. The first one was an elimination diet but I knew I couldn’t do it while training for a marathon (which I’ve pretty much been doing non-stop since 2008) because it was way too strict and I didn’t think I’d be able to consume enough calories to get me through the training. When I realized I wouldn’t be able to run for a while, I knew it was the perfect opportunity to try the diet. I followed the elimination diet through The Whole Life Nutrition cookbook. My first two days I only consumed green smoothies

.
After that, I slowly began adding foods in one and a time. By Day 18 of this experiment I realized that I still didn’t feel much better. Luckily for me, one of my good friends is a Nutritionist and she agreed that if I wasn’t feeling better by this time, then the diet probably wasn’t going to help me out much.

We discussed a couple of other diets that I could try. I was feeling a little discouraged by this point but not ready to give up as I had already gone so far. One of the diets we discussed was one that I had read about a couple of years ago and thought it held the most promise as I had already realized some of the things on the diet seemed to be a trigger for me. It is called FODMAPs and is defined here but in a nutshell there are certain things that are poorly absorbed in the small intestine which can lead to symptoms characteristic of IBS (characterized by chronic abdominal pain, discomfort, bloating, and alteration of bowel habits). This was a fairly easy diet for me to follow after having spent 18 days on the elimination diet ;0). I am already a vegetarian and as I mentioned before had previously eliminated dairy and gluten from my diet so I already had a few recipes to draw from, but of course I scoured the internet for some new things to try.

After trying this diet for about a day, I realized that I was on to something. Usually by lunchtime was stomach was already upset and I spent the rest of the day dealing with it. Right away my stomach was much better and I actually felt normal. I have now been following the diet pretty strictly for a few weeks and feel so much better. It’s amazing to think that after years of dealing with a daily upset stomach, the solution is actually relatively simple. While I miss a few of the things that are on the no-no list (garlic- boo!), it is by no means restrictive and I have actually branched out and explored new recipes. 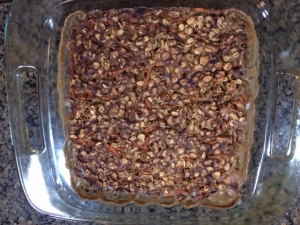 So while it sucks that I can’t run, at least I’ve been able to be productive in my off time. And when I get back to running, my stomach will be one less thing for me to worry about! 🙂

I am a runner, wife and mother of three. I've been running since I was a kid and had my first taste of victory when I beat all the boys (and girls) in my grade at a school run. Since then, I've had a love/hate relationship with running....I love to run but hate how the training can sometimes monopolize my time and prevent me from doing "fun" things. So, I try hard to find the balance between challenging myself with running, while still having lots of fun on the side.
View all posts by Paige →
This entry was posted in Uncategorized and tagged fodmaps, ibs, nutrition, Running, whole life nutrition. Bookmark the permalink.